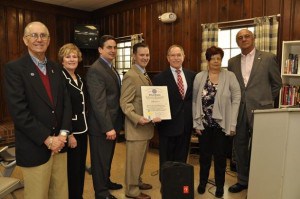 “This center provides an array of much-needed health care services and benefits to seniors, both in the Springfield Housing Authority and the surrounding community,” stated SHA Executive Director William Abrashkin. “This is tangible evidence of the success of collaborative efforts. Several organizations pooled ideas and resources to make the Forest Park Manor Activity Center a reality. We all feel that this is just the beginning and we look forward to joining together again in the future for the benefit of our community.”

The primary partners in the Forest Park Manor Activity Center collaboration were the SHA and the City of Springfield’s Department of Elder Affairs. Other supporting partners include the Springfield Council on Aging, the Springfield Golden Age Club, The Sisters of Providence Health System, and the Jewish Family Service of Western Massachusetts. 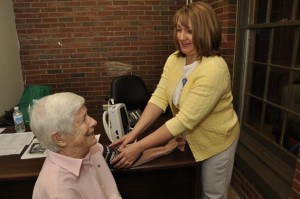 Elizabeth Porchelli, from the City of Springfield Department of Health and Human Services, takes the blood pressure of Mildred Dunbar, a resident of the Springfield Housing Authority, at the Grand Opening of the Forest Park Manor Activity Center.

“We are committed to collaborating with the Springfield Housing Authority on meeting the needs of seniors in the city of Springfield,” said Janet Denney, Director of Elder Affairs for the City of Springfield. “It is during these fiscally trying times that we need to come up with ways to extend our fiscal and human resources. This is a prime example of how we can do more by coming together. Specifically, we will be offering blood pressure clinics, fitness classes, painting classes, and forming a grandmothers group with the Vietnamese community.”

The SHA remodeled and expanded the Community Room at its Forest Park Manor property to create the new center. The renovations were funded by a $250,000 grant from the Commonwealth of Massachusetts’ Division of Health Care Finance & Policy which was awarded to Springfield Housing Associates Inc., a nonprofit subsidiary of the SHA.