Sure enough, the expected visitor – none other than Santa Claus himself – climbed down, followed by 43 young volunteers, Jewish Community Center’s ‘Don’t Just Sit There’ troupe, known for planning and executing acts of immense kindness.

Amy Kimball, summer camp and teen director at the Jewish Community Center, stands with, from left to right, Jose Hernandez and his wife Ashley Garcia, Zachary Chernick, who is president of the JCC’s ‘Don’t Just Stand There’ community service youth group. In front are brothers Jose and Isaiah Hernandez. The Garcia-Hernandez family lives at SHA’s Sullivan Apartments.

On this day, that meant piles of gifts to 13 area families, 12 of them from four SHA family developments, and hundreds of additional gifts passed out from the back of a truck to a crowd gathered in the parking lot.

For beneficiaries like the Garcia-Hernandez family, the bonanza was heaven sent.

“It’s amazing,” said Jose Hernandez, who with his wife, Ashley Garcia, and two young sons, greeted the volunteers in their third-floor apartment, which quickly filled to capacity. Gifts, including pajamas, towels, warm clothing, sheets, blankets, and yes, toys, were piled under the Christmas tree.

“It’s a blessing for all the families, and I can tell you were are very grateful,” said Hernandez, whose illness has kept him from working for more than a year. “It’s a gift from God. Just the thought of someone doing so much, giving so much, it’s unbelievable.”

His mother chimed in, “It’s a great day for all of us. It’s a day of giving.”

And in an unusual twist, Hernandez, Garcia and the boys had their own gifts for givers from ‘Don’t Just Sit There,’ including two snow globes, a teddy bear, candy canes, and a pile of holiday cards. 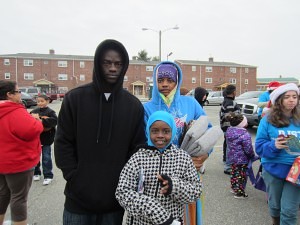 Siblings Abdi, Jawhara and Adey Kabir hold towels, blankets, toothbrushes and other necessities from the ‘Don’t Just Sit There’ holiday bonanza at Sullivan Apartments on Dec. 16.

‘Don’t Just Sit There,’ known as DJST, is the brainchild of Amy Kimball, who is summer camp and teen director at the Jewish Community Center. The holiday gift events began 13 years ago with a single family, and a few donated items.

Since then it has grown into a bus full of teen volunteers, from Springfield, Longmeadow and East Longmeadow, and days of work that include shopping, wrapping, and finally, gift-giving. Kimball said her volunteers return for the event even after they’ve graduated and gone off to college.

“We try to focus on the things that they’ll need through the year, like gloves and hats, winter clothes, sheets, towels, kitchen items,” Kimball said. “But we always include some toys for the kids.”

Among the items for Jose and Isaiah was a mountain bike, donated by a local family. 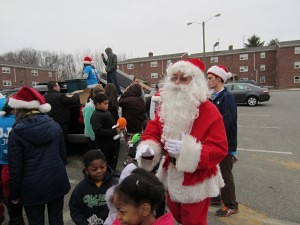 Santa Claus, also known as Clifford Langford, greets residents at Sullivan as ‘Don’t Just Stand There’ volunteers hand out gifts from the back of a truck.

Kimball said the effort counts on donations from companies including Yankee Candle, King Ward Tours and Old Navy, with help from United Way of Pioneer Valley. Many individuals, including the students in her group, also donate in the form of cash or items.

SHA Resident Services Manager Pamela Wells followed the bus on Sunday from Sullivan to apartments in Duggan Park Apartments, Reed Village and Robinson Gardens. The atmosphere was festive at every step along the way, she noted.

“It’s absolutely great for our families, and for the group of teens that Amy brings around,” she said. “They really bring holiday spirit, wherever they go.”

At Sullivan, children and parents gathered in the parking lot as the volunteer teens handed out gift-wrapped items. Those who received were happy.

“They’re always amazing,” said Patrice Jiles, the mother of three young children. “They come every year. They’re awesome. They give you things that you really need, like hats and gloves.” 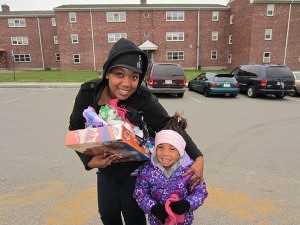 Patrice Jiles and her daughter Ianna James are thankful for the pajamas, hats, scarves and mittens.

Her four-year-old daughter Ianna James smiled broadly as she held up a newly opened package with black gloves and a pink hat.

The DJST troupe gave away some $7,500 worth of gifts as they traveled around, Kimball said. One of her volunteers, Kelsey Yam, said the goodwill stretches much farther.

“I’ve been doing this since I was a sophomore in high school,” said Yam, now a senior at Skidmore College in New York. “I love the atmosphere that it creates. It’s so cool. I wouldn’t miss it.”