As Springfield Housing Authority’s grants coordinator, Lidya Rivera is always on the lookout for opportunities and funding for the residents she serves.

But anyone who knows her understands that her work goes far beyond that.

In her 5 ½ years at SHA, Rivera has not only helped garner and oversee a variety of grants aimed at giving residents the tools they need to live independently, she has also personally reached out – over and over again – to inspire and stand by those who live and work at SHA.

In essence, she just doesn’t give up, even for those who feel close to that point themselves.

“I’ve always seen my goal as doing something that gives back to the community, and this job allows me to do that,” Rivera said. 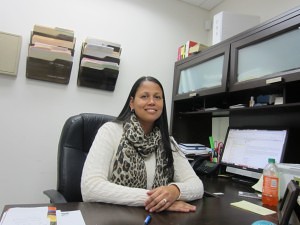 “There’s a saying that goes, ‘When you love what you do, you never have to work a day in your life.’ That’s how I feel,” she added.

“Lidya is my role model,” said McCarter, a single mother of three who lacked a job as well as a high school diploma when she moved into the John L. Sullivan Apartments several years ago. Overwhelmed and without a clear path, McCarter said she felt adrift.

But Rivera sought her out, and the good things began happening.

“When I started, I had no GED,” said McCarter, referring to the General Educational Development tests that bring the equivalent of a high school diploma. SHA runs GED classes at Sullivan as well as at Riverview Apartments. The popular programs always have long waiting lists.

“That was one of the things Lidya never gave up on me about,” McCarter said. “I tried for a long time. She wouldn’t let me give up, at all. There’s just something about her. She believes in people.”

McCarter went on to finish the program, pass the test, and then complete a Certified Nursing Assistant program at Holyoke Community College. She now works per diem as a nursing assistant at Reeds Landing, on top of a full-time job as Section 8 applications clerk at Riverview.

For Rivera, helping people like McCarter and many others is all in a day’s work. And a look at how she runs her own life offers a glimpse of what lies beneath the surface.

Born in Stamford, Conn., Rivera spent her early childhood in her family’s native Puerto Rico, returning stateside, settling in Springfield, and enrolling as a ninth-grader at Central High School. She graduated in 1994.

She worked for the next decade in the world of business, with several jobs she found unfulfilling. Rivera said she always dreamed of a job where she could help others and see results on an individual basis. With that in mind, she landed a job as a self-sufficiency coordinator at SHA, work that has expanded over the years.

While continuing to work full-time and raise three children, Rivera went back to school, earning a bachelor degree in human services at Springfield College in 2009. She stayed on at the college, and two years later completed a master’s degree in organizational management leadership.

At SHA, she has forged working partnerships aimed at helping residents with several agencies, schools and organizations, even as she has expanded resident services to include the GED program, English-as-a-second-language classes, training in financial literacy, job preparedness, computer literacy skills, and more.

Rivera’s collaborations include one with Western New England University, which recently won an AmeriCorps Vista grant (Volunteers in Service to America) to help promote SHA services at the university and build up a student volunteer force. Another venture with the New North Campus Coalition has helped expand the GED program to Riverview. And yet another with the City of Springfield helps fund educational and training initiatives.

Those who work with Rivera offer high praise.

“Lidya contributes intelligence, belief in the potential of our residents, knowledge of the community and of the SHA, unquestioned integrity, and an excellent work ethic,” said SHA Executive Director William H. Abrashkin.

“Lidya is a pleasant person to work with, mature and able to assess all aspects of a situation and then to take appropriate action. Her bilingual and bicultural skills are also of great value to the SHA,” he said.

It was Abrashkin who recommended Rivera be included in the Leadership Pioneer Valley course, a 10-month leadership skills training initiative she is currently completing. Rivera is also a member of the Puerto Rican-Latino Leadership Council.