SHA teens learn a harsh lesson from an expert

Timothy Mullen has fought the battle with addiction – he’s smoked weed and crack, shot up heroin, been beaten up by street thugs, even lived in a vacant lot behind a package store, where he could easily step out front to beg for enough small change for his daily fix.

His drug-fueled existence consumed more than three decades of his life.

Mullen’s story, startling and horrifying by turns, was enough to silence a dozen members of Springfield Housing Authority’s Robinson Gardens Apartments Youth Group. The teens sat spellbound as Mullen, now 59 and straight for 11 years, detailed the steps of his downward spiral, starting when the life-long city resident was a teen living in what was then called Winchester Square, now Mason Square in Springfield. 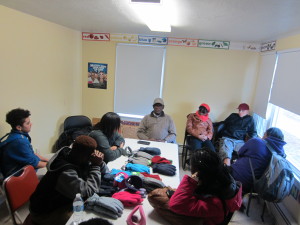 “What you’re looking at now is a recovering addict,” Mullen said in his hour-long visit with the teens.

“When I was your age, I started living a life that just kept on getting worse and worse. I dropped out of school, smoked weed, did crack, shot heroin, you name it. If it was bad for you, I did it,” said Mullen.

The details of his decades-long slide and remarkable recovery hit the mark with the SHA youth, including Jenashia Scott.

“He was telling us never to do drugs,” noted the 18-year-old. “He showed us just by talking what the outcome will be if we do.”

Most compelling, she and others agreed, was the similarity of Mullen’s growing-up years to their own experiences now.

“His life then was basically our lives now. A lot of us are growing up the way he grew up. We know those places he was talking about,” said Scott, who is a senior at Central High School. 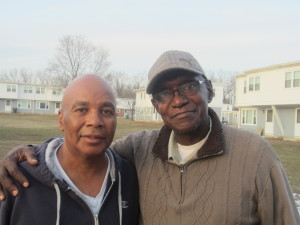 Mullen grew up on Terrence Street, near to the juncture of four of the city’s most crime-ridden neighborhoods – Bay, McKnight, Old Hill and Upper Hill, McKnight. His schools were DeBerry, Kennedy and Commerce, but he never graduated, flunking out of his junior year.

“I ended up in jail, over and over, but that never changed my thinking. I got deeper and deeper into the disease of addition. My life kept getting worse and worse,” he said.

For many years, his family supported him, visiting him in jail when he was locked up, giving him cash for the commissary. But when he was out, his behavior was so bad – at one point he turned his aunt’s home into a crack house – that they washed their hands of him in 2004.

“That was tough love,” he admitted. “And I had the nerve to be mad at them!” 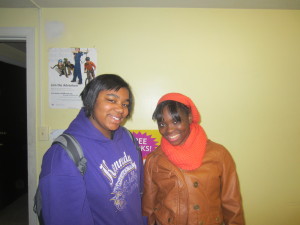 He was in and out of jail, for what calls “a life sentence on the installment plan, in and out, in and out,” and on the streets, things weren’t much better. Drugs were his main fixation.

In his darkest years, he was sleeping outside in a garbage-strewn lot behind a package store.

“I was penniless and homeless. I’d stand out front when the store was open and panhandle pennies to get myself a fix,” he said.

In late 2004, Mullen was arrested again, and found himself back in the Ludlow county jail. Though he’d heard many times before that cleaning up would be a good thing, this time the message clicked. He gives credit to correctional counselor Joseph Nickerson.

“I had an awakening,” Mullen said. “I started doing whatever he told me to do. And as I did those things, my life started getting better. I had my doubts at certain times, like ‘why was I doing this?’ but I could see how much better my life was.” 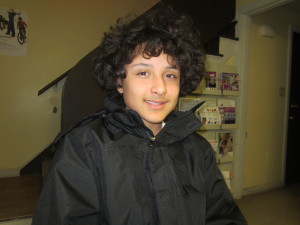 With help from the 12-step program Narcotics Anonymous, the improvements have continued unabated. At age 50, he got his driver’s license, a first. He landed a job at the Hampshire County House of Correction, first part-them, then full-time, and with promotions he is now reintegration coordinator and release liaison.

Six years ago, Mullen got married – another first.

“I courted her. I went to her door, took her out, met her mother. I got the nerve to go down on my knee and ask her to be my wife, and she said yes,” he said, smiling broadly.

Despite some health problems, which he attributes to years of abusing his body, he is thrilled to be alive, and happy with where he’s at. He considers sharing his story an important part of his own recovery, and also, a means to make young people think hard about their choices.

“I stole from my friends, my mother, my father, my friends, everybody. The disease of addiction has no morals. I keep the memories because when the voice comes to me, I know what it is. Those who forget are doomed to repeat,” he said.

“Today, my life is phenomenal,” he added.

For the Youth Group at Robinson Gardens, the message was loud and clear.

“I thought his story was a little bit scary,” said Ty’Nasia Griffin, who is 13. “Awful things happened to him. I won’t do drugs myself. It’s not good for me.”

Ty’Nasia is a student at Kennedy, the same middle school where Mullen attended years ago. 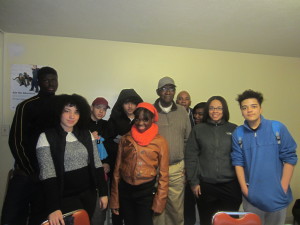 Recovering heroin addict Timothy Mullen with some of the Robinson Gardens Youth Group.

“It was so interesting,” said the 14-year-old. “The message to me was don’t do drugs. It leads you to a bad life.”

The Youth Group is run by Jimmie Mitchell, a retired counselor from Roger Putnam Vocational Technical Academy. He’s also a long-time friend to Mullen, who he has known through many of the bad years.

“I wanted these kids to know what happens when you do drugs,” Mitchell said.