Joseph Dumpson, Springfield Housing Authority’s Family Self-Sufficiency Coordinator, has taken professional and community involvement to the next level – he runs a ‘Walking School Bus’ route at the Rebecca Johnson School, in the heart of Mason Square.

Dumpson became interested in the Walking School Bus through his regular attendance at the C3 Community Policing weekly team meetings in Mason Square, where he forged ties and has ongoing relationships with people from the community, including residents, state and local police, health-based organizations, and schools, among others who have a stake in a healthy and successful Springfield. 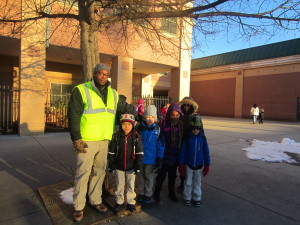 SHA’s Joe Dumpson and some of his charges on the Walking School Bus at Rebecca Johnson School.

At those meetings, Dumpson learned that many young children are walking to and from school alone or with their peers, some of them through the heart of the city’s most risky neighborhoods. At Rebecca Johnson Elementary School, 90 percent of the children are walkers.

School Department policy requires all children living up to two miles to walk to and from school.

Dumpson decided he could help with that. He helped devise a new route for the Walking School Bus already in motion and serving SHA children from Reed Village. Dumpson’s route takes a dozen or so children each day to and from their homes along Thompson, Sherman and Bay streets. His walk includes several SHA scattered site and Section 8 properties.

So each morning, he arrives at Rebecca Johnson at 8 a.m., hikes it out to the farthest children on his route, and guides them safely to their school day. He then heads to work, either on the third floor at SHA headquarters at 60 Congress St., or at the Section 8 office at 67 Sanderson St. 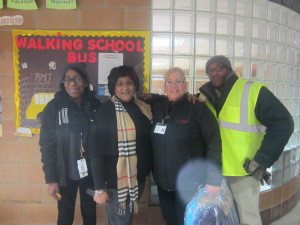 Why does he do it?

“I realized there were all these children, some as young as five years old, walking almost two miles through some of the worst areas of the city,” he said.

“To me, that sounds bananas. So I decided to go there and walk them in, to keep them safe. Let them be innocent for as long as they can,” he added.

Dumpson noted that as a life-long city resident and as a father himself, he cares deeply about Springfield and wants the best for its residents, most especially the children.

His time at Rebecca Johnson has added a route to an existing system of adult-managed and safe school walking, overseen by the school’s parent facilitator Michelle Norman. The first and largest Walking School Bus includes 71 children, three school staffers, including Norman herself, and parent volunteers. There is also another, smaller route, for a total of almost 100 children who are guided daily on their walks.

Norman said the Walking School Bus was launched last year in conjunction with ‘Massachusetts Safe Routes to School,’ a Boston-based branch of a national organization that sent staff to visit the school and the neighborhood to asses and recommend routes.

Norman said Dumpson, known affectionately by the children as ‘Mr. Joe,’ has made his mark.

Indeed, as children streamed out of their classrooms on a recent afternoon, many waved and called out to their ‘Mr. Joe’ as he waited for his charges.

“Mr. Joe is cool,” said 8-year-old Gregory Bodison, giving a smile and a thumbs-up sign as he walked past. “He’s nice, and he’s always doing some funny stuff.”

SHA Deputy Executive Director Michelle Booth said Dumpson has proven himself an asset since he was hired one year ago as part of the newly formed Participant Services Department.

“Joe has a great heart for the challenges faced by so many children and families in our community,” Booth noted, adding that when Dumpson heard about the need for volunteers at Rebecca Johnson, he didn’t hesitate.

“Joe not only volunteered, but brought together a group of friends to make them aware of the need for volunteer.  Walking the children to school every day, Joe noticed that many didn’t have adequate clothing for the cold weather, and in true Joe Dumpson style he networked to find sources of warm coats, hats and gloves for the children.  Joe is a great reflection on the SHA, and I’m so proud to have him as a colleague!”

Coats and hats for Dumpson’s passengers came from the School Department’s Parent and Community Engagement Center, courtesy of Blanca Berrios, who is SHA’s Director of Rental Assistance.