With a luncheon, a few remarks and a plaque, the Talk/Read/Succeed! family recently gave thanks to state Sen. James Welch for his long-standing support of the early literacy program that unites housing, school and the community. 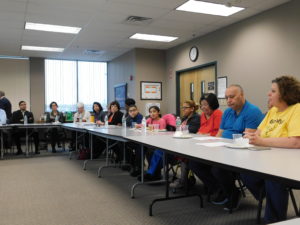 SHA Executive Director William H. Abrashkin greeted the crowd with words about the importance and impact of the program , now in its ninth year and reaching out to 350 young children from many of the 428 families at three housing developments.

“We’re here to showcase the success of a program that looks at children not as a problem, but as a resource,” Abrashkin noted. “Every partner brings its resources to the table. We know we’ve got a long way to go, and we know we will always have a friend in Senator Welch.”

For his part, Welch had a few words to say about the program he has unfailingly supported over the years.

“This is a very special day for me, and I’m so glad that this program is able to make an impact on families and children and really, on the entire community,” Welch said. “We can see the benefits even if they are hard to calculate on a spread sheet.” 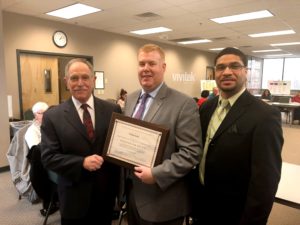 Talk/Read/Succeed! is a united push for literacy and ultimately, independence, bringing together families at Duggan Park, Robinson Gardens and Sullivan Apartments, along with their feeder elementary schools, Indian Orchard, Dorman and Boland. 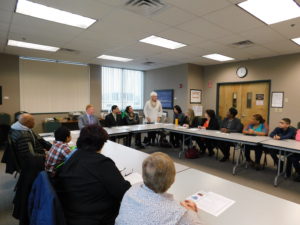 Many of the partners were at the luncheon, sharing anecdotes that highlight the success of a united effort at literacy.

“This partnership has been so helpful to us,” said Katherine Moss of BHN, which provides family and individual counseling along with family-based programs at both the housing developments and the schools.

“We don’t meet people by sitting and waiting for them to come to us. T/R/S! has given us the opportunity to meet people where we developed with the home visits.”

Other efforts between Sullivan and Boland include a ‘Walking School Bus,’ summer learning programs, and learning sessions in the Community Room at the housing development. Bakowski is often known to show up as a special guest at Sullivan picnics and events. 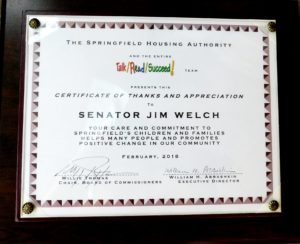 At Dorman, Stowell-Lewis agreed that the program has launched and nurtured many positive relationships with parents and children, and has boosted academic performance by keeping parents involved in the school, in addition to the programs focusing on literacy.

“As families engaged through T/R/S!, a significant amount of trust has developed. The collaborations have been phenomenal,” Stowell-Lewis said.

Robinson Gardens resident Ivette Fernandez said the program has made her a better parent, and has made her family healthier and happier.

“For me and my family, this is been a great program,” said Fernandez, who with her two young sons attends nearly all events and activities, including the annual summer garden. “I’d love to see it at all the developments.”

“They do mostly everything that’s for kids,” he said. “At Boland, you can make so many friends. Even the teachers are your friends and they make everything seem fun.”

Another aspect of T/R/S! that was highlighted was the Youth Program at Robinson Gardens. Under the tutelage of SHA Youth Outreach Coordinator Jimmie Mitchell, teens meet every weekday afternoon for education and guidance that prepares them for a productive and positive future.

Mitchell, a retired high school counselor, said the program reaches out to young teens, often before they can be tempted by negative forces.

“Sometimes if you get the kids when they’re too old, it’s hard to grab them back. If you get them while they’re young, it’s a whole lot easier,” he said.

In his seven years working with youth in the program, Mitchell has seen solid success, with all participants graduating and going on either to higher education or the workforce.