SHA Board of Commissioners

Thomas Labonte has been elected chairman of the Springfield Housing Authority Board of Commissioners.

Labonte has served on the commission since 2012 and is the organized labor representative. He worked for the city of Springfield for more than 40 years, and served as Vice President of the United Food & Commercial Workers, Local 1459.

In its annual reorganization, the Board of Commissioners also appointed Angela Robles as vice chairwoman, Raymond Warren as treasurer, and Jessica Quinonez as assistant secretary. The fifth member is Willie Thomas, who has served as chair the past three years.

The five-member board oversees all budget and policy members for the SHA, the largest public housing agency in Western Massachusetts, with 2,329 traditional public housing units located at 27 site, 240 Massachusetts Rental Vouchers and 2,893 Housing Choice Vouchers. Four members are appointed by the mayor, and the fifth by the governor.

The reorganization was voted on at the October meeting, the first with newly appointed Executive Director Denise Jordan. 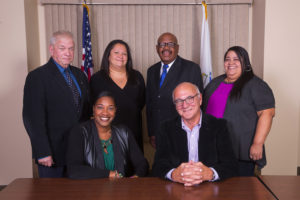