They met at the Statehouse in Boston on March 7.

At the event luncheon, the SHA expressed its appreciation for the past support it has received from Senators Welch and Lesser for improving public housing for the residents of the communities they represent. The authority urged the legislators to consider an increase in the state subsidy for local public housing, so it can better serve the residents of its properties.

The state subsidy for public housing was level-funded at $64.5 million from FY2013 through FY2018. The Legislature increased the line in FY2019 by $1 million, but the need is documented at more than $120 million.

Mass NAHRO is again requesting an increase in the subsidy to $72 million. Additional operating subsidies would enable local housing authorities to hire sufficient administrative and maintenance staff, and to purchase adequate supplies, resulting in a faster turnover of vacant units.

“Insufficient funding makes it more difficult for us to adequately meet the maintenance and service needs of our residents,” said Jordan. 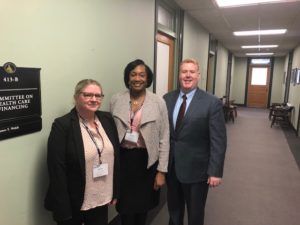 “We want to thank Senators Welch and Lesser for their past commitment to providing safe and decent affordable housing for the residents of Springfield, and we hope they will continue to support our efforts to preserve and sustain locally-owned and operated low-rent public housing,” Jordan added.

Local public housing is the state’s most cost-effective housing for low-income seniors, families and the disabled.

The average subsidy currently is $130 per unit per month. The cost of shelter is approximately $3,000 per person per month.

Freezing the subsidy at the present level is the equivalent of a 6.9 percent cut.

Local housing authorities are struggling to fulfill their mandate to provide safe, decent and sanitary housing on budgets that are already stretched.