For Nelson M. Rojas Jr., the garden at Springfield Housing Authority’s Sullivan Apartments is a labor of love.

Twice a day, the 13-year-old visits the raised garden beds behind the Community Room at Sullivan to tend and water the tomatoes, squash, eggplant, peppers and brightly colored flowers that grow there. 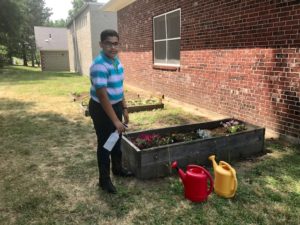 The work of it is his personal pleasure.

“It just makes me feel really good, doing this,” he said. “Every day, I can watch the plants grow and take care of them. I know I’m doing something good for the community, and it’s just relaxing for me.”

The garden at Sullivan may be small this year, but organizers Christopher Trevethan and Zenaida Burgos, both staffers at SHA, have big plans for next year. They aim to expand it to be about 80 square feet in size, and involve many of the families who live there.

“This year, we’re focused on getting people educated about it, about gardening in general and about growing our own food,” said Trevethan, who is ESL/Computer Instructor at Sullivan’s Deborah Barton Neighborhood Network Center, where the Community Room is located. 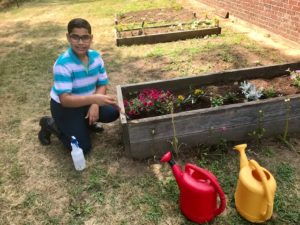 Nelson M. Rojas Jr. shows off the petunias, marigolds and other flowers at the garden at Sullivan Apartments.

“Next year, we’re hoping to go bigger and better,” he added.

SHA Executive Director Denise Jordan congratulated Sullivan and Nelson in particular, for planting the garden and keeping it going. She loves the idea of an expansion for next year.

“Growing a garden can only be a good thing,” Jordan said. “You’re outdoors, working the soil and growing things you can eat and enjoy. A community garden does all that in addition to bringing people together for a good cause.”

Nelson’s gardening passion began when Burgos went away for Fourth of July weekend and asked him to take care of it while she was gone. When she returned, he asked her if he could continue doing the work of it.

“I just really liked it and didn’t want to stop,” said Nelson, who will be an eighth grader this fall at Libertas Academy Charter School. 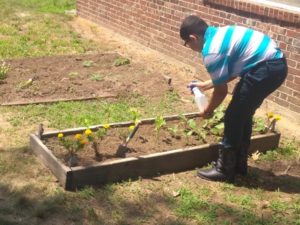 “It’s such a pleasure seeing him get so involved in the garden,” said Burgos, who is Outreach Coordinator for SHA’s Talk/Read/Succeed! family-based early literacy program.

“The garden is a great thing for our residents,” she added. “It’s a wonderful way to get them involved in something that is good for them, and can bring them together. Our plan for next year is to grow a lot more vegetables and have them for the residents to take home, cook and eat with their families.”

“The more we can continue to do this and grow it, the better it will be for everyone,” she said.

Nelson’s father, Nelson M. Rojas Sr., said it makes him happy to see his son taking such pleasure in the task of growing good things.

“I’m just so proud of him for doing this and getting so involved,” he said. “I hope when he grows up he’ll have a nice big garden of his own someday.” 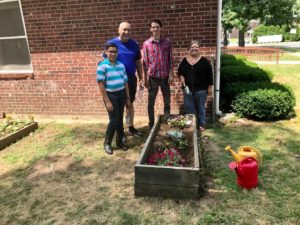