Back to School parties draw crowds at three SHA developments

In Springfield, that happens on August 26 for those in grades 1 through 12, and on Sept. 3 and 4 for kindergartners and preschoolers. 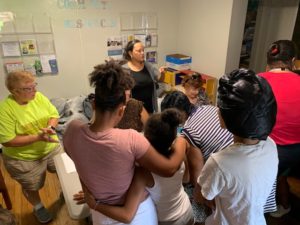 Parents and children line up for backpacks filled with school supplies at Duggan Park Apartments.

Celebrations were held at Duggan Park, Robinson Gardens and Sullivan Apartments. Each party drew about 100 people in gatherings with a focus on fun and neighbors, sponsored by SHA’s Talk/Read/Succeed! family-based early literacy program.

At Duggan, the celebration had a happy tone inside and outside the T/R/S! headquarters at 435 Goodwin St. Staff handed out backpacks loaded with notepads, pencils, crayons, rulers, youth volunteers served up ice cream donated by Alvin’s All-Natural Ice Cream, and the Forest Park Zoo on the Go stopped by to show off a cockatoo, a hedgehog, and a few other unusual animals. 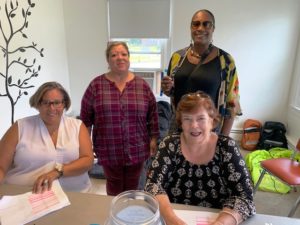 At Robinson Gardens, ice cream cones came courtesy of Kelly Dobbins of Iona’s Cafe & Grill. The party in the common yard between the apartments included a few giant games.

At Sullivan, ice cream treats came from the window of a truck, with each participant getting a coupon for a free treat after parents picked up backpacks and literature that will them at the start of the school year, and beyond.

Raffle prizes included toys donated by an anonymous benefactor, and books from the Book Rich Environment program, thanks to SHA’s participation in a national coalition that includes the U.S. Department of Housing and Urban Development, the U.S. Department of Education, the National Book Foundation, and the Urban Libraries Council. 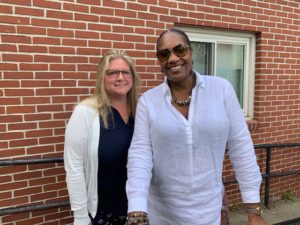 SHA Executive Director Denise Jordan said the festive occasions were a great way to get children and their parents ready for the return to the classroom.

“This gets everybody focused on school in a very positive way,” Jordan said. “They get a few handy tools to get them ready, and they have a chance to interact with neighbors in a fun and productive way.” 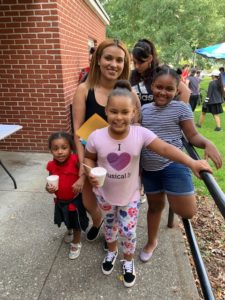 Carlina Rivera brought her children, Malina, Chlore and Tayana, to the participate in the fun.

For parents and children, the day was a neighborly way to get together and to give nod to the changes that are just on the horizon.

“I’m happy about school in a way because my best friend is going to be in my same classroom,” said 10-year-old Anayalise Casiano, a student at Warner Elementary School.

“But I’m nervous too because I know fifth grade is going to be harder than fourth grade. I’m going to have to study and work hard,” she admitted.

She arrived to the celebration with her mother, Ivette Hernandez, and her older brother, Isaiah Bermudez, who is 14.

“We love things like this because it’s so good to get out here and participate, and good for the kids,” said Hernandez.

“I like this,” she said. “It gets everybody together and it gets the children all thinking about school. It’s that time.”

Colby the bald python from the Forest Park Zoo on the Go drew a lot of cautious interest.

At Robinson Gardens, parents and children gathered around for games, ice cream, and backpacks. For neighbors Francheska Correia and Octavia Jones, it was a great chance to catch up.

“Anything with T/R/S! is good for the children and good for all of us,” Correia noted.

At Sullivan, children flocked to Forest Park’s Zoo on the Go, petting some animals and shying away from others, as Forest Park Zoo educators Savannah Marcotte and Kenny White took a variety of creatures out of their traveling cages. 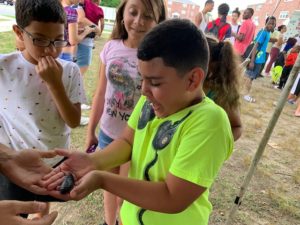 Nine-yer-old Michael Borgas, soon to be a third grader at Boland Elementary School, lets a giant cockroach scuttle across his hands.

“I was a little nervous about touching the cockroaches, but it was okay,” said nine-year-old Michael Borgas. “It tickled when he ran across my hand.”

Yashira Santana brought her two children, Khamy, who is 11, and Wensly, who is 8.

“This is a nice way to end the summer and get everyone thinking about school again,” Santana said. “We’re looking forward to it. Everyone is.”

Visiting animals included Ella the cockatoo, Sonic the hedgehog, Logan the ferrit, Cheetoh the lizard and Colby the bald python, Yzma the red-tailed boa, Beans the red-footed tortoise, Arrow the blue-tongued skink and a couple of unnamed Madagascar cockroaches. All drew oohs and ahhs, along with the chance to gently pet animals not often seen.

T/R/S! is nearly a decade old, starting out in 2010 at Robinson Garden and Sullivan and expanding to Duggan. The program works with several local agencies, along with feeder elementary schools Indian Orchard, Dorman and Boland, for programs and services. 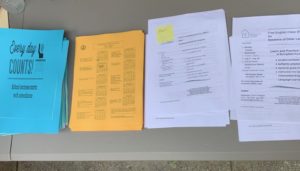 Families were able to access important information about the upcoming school year.

Wells said the event is an important part of the T/R/S! program, with similar back-to-school activities schedule for the other two program sites, Robinson Gardens and Sullivan Apartments. Children get important items to begin the school year, parents pick up printed information relating to their children’s education – including the academic calendar for the 2019-20 school year – and families register for ongoing activities aimed at boosting literacy.

“Our back-to-school events are a great way for us to get parents and children involved in the T/R/S! programs that continue through the year,” Wells noted. “They also give everyone an opportunity to catch up or meet each other as the summer comes to an end.” 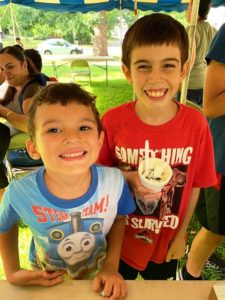 Visiting animals included Ella the cockatoo, Sonic the hedgehog, Logan the ferret, Cheetoh the lizard and Colby the bald python. All drew oohs and ahhs, along with the chance to gently pet animals not often seen.