Sullivan Apartments parents get a sober look at school attendance

When it comes to school and learning, attendance is everything.

That was the heart of an hour-long discussion given recently at Springfield Housing Authority’s Sullivan Apartments, a stone’s throw from the Edward Boland Elementary School where children walk up the hill daily for classroom learning.

Parents at Sullivan listened in rapt attention as Melissa Burrage, coordinator at the Springfield School Department’s Parent and Community Engagement Department (PACE), spelled out the consequences for children of missing too much school: They are much more likely to fall behind in all areas, including reading, and even later to drop out of school. 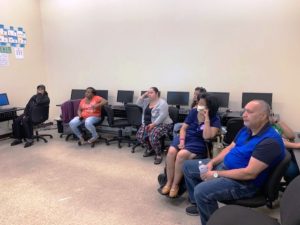 Sullivan parents listen attentively at the discussion on the importance to getting to school every day.

“Many parents don’t see the connection between missing school at a younger age, and academic performance as they get older,” Burrage said. “Going to school every day is very likely to mean success right away, and through life.”

The discussion in the Deborah Barton Neighborhood Network Center at Sullivan was sponsored by Talk/Read/Succeed!, the family-based early literacy program based at three SHA developments, connecting them with neighborhood schools and other agencies including the school system. Also in the program are Robinson Gardens and Duggan Park Apartments and their feeder schools, Dorman and Indian Orchard. 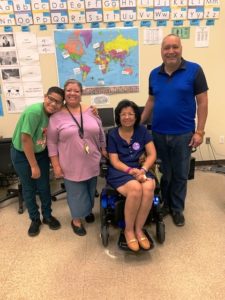 SHA Executive Director Denise Jordan said boosting literacy among children and families is likely the single biggest strategy to keeping children in school, helping them do better in life, and encouraging financial independence. And school attendance is key.

“Anything we can do to encourage children to go to school every day, and to help parents understand how important that is, will be a plus for everyone,” Jordan said. 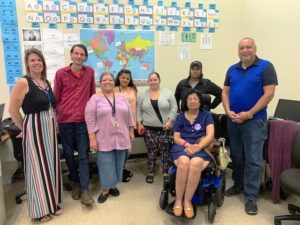 Parents and officials after the discussion on the importance of school attendance.

“Your child’s attendance in grades kindergarten, one, two and three could have a very big impact on whether your child graduates from high school,” Burrage said.

“This is so good to know,” said Nelson Rojas, who has two young children in city schools.

“My children know they have to go to school,” he said. “But I never realized how much of a difference it makes even as they grow up. She explained everything very well.”

T/R/S! Program Coordinator Zenaida Burgos invited Burrage for the session as part of an ongoing thrust this year to keep parents and children mindful of the importance of getting to school every day.

“The T/R/S! team felt that it would be a  great starting point to have more dialogue regarding the topic and its impact,” Burgos said. “We want our parents to understand why it is so important to send their children to school every day. Having children in school every day creates academic Success.” 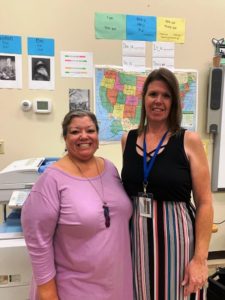 Burrage also shared details on the School Department’s attendance policy, which includes automated calls to home on the first two unexcused absences, a letter and referral after the third or fourth, a conference or home visit after the fifth or sixth, and stronger action as more school days are missed, leading to possible action in Juvenile Court.

After more than 14 unexcused absences, it will be up to the principal to decide whether the child should be promoted to the next grade level, she said.

School officials work with chronically ill children and their families, she noted. Burrage also stressed that parents should set up medical appointments for the children before or after school, or as close to those times as possible so the child can be in school most of the day.

She also included details on when a child is sick enough to stay home. Children with a cold or the sniffles are fine to go to school, she noted.

Afterwards, Burrage said she is always happy to speak to groups, and hopes her message not only rings true with those who attend, but gets spread around to other parents who may need the information even more.

“We’re looking for all parents to be more aware of how important attendance is in terms of school success, and life success,” Burrage said. “Many don’t realize that poor attendance affects the other children in the class. It’s so important to get the word out.”