Everyone was a winner at a recent Bingo luncheon at Springfield Housing Authority’s Sullivan Apartments.

The fun started in the late morning, with several men joining in from the family development in the Liberty Heights section of the city. There was lunch, followed by Bingo, and much laughter and celebration.

The low-key event was meant to promote some male bonding, following a highly successful Father’s Day luncheon in June, and to continue promoting and drawing interest in SHA’s family-based early literacy program, Talk/Read/Succeed!

SHA Executive Director Denise Jordan said such gatherings are sure to develop ties among neighbors with a shared interest in guiding their children to success.

“Getting neighbors together for socializing and having fun is a good way to make ties and friendships that are sure to benefit our families and residents,” Jordan said.

The session was organized by T/R/S! Program Coordinator Zenaida Burgos, in her ongoing quest to provide quality programming that will unite parents as they work together to raise successful and independent children. 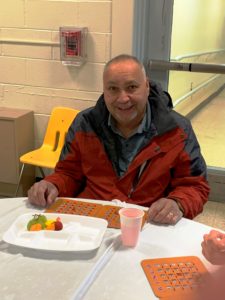 The lunch progressed with light and friendly conversation. It was the Bingo game, with Burgos as caller, that lit up the room with laughter and much competitive banter.

Burgos said her goal for the event contributes to a longer-term goal to keep families involved.

“We wanted to do something for the Dads on a regular basis to show appreciation for their involvement with their families, and to form friendships at Sullivan,” Burgos said. “We’ll do this every two months. Hopefully we will continue to get more and more people to come join us.”

Sullivan resident Radames Garcia confounded all by winning the first two contests. But in the end, everyone had won at least one card, with one left for the sole player whose luck did not present itself that day. 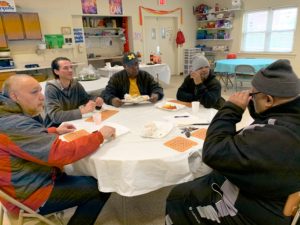 Sullivan Apartments residents wait for the winning numbers at a Bingo game.

Garcia exclaimed his delight at winning games one and two.

“This is just great, winning of course feels good but it’s great just to get together with the neighbors and have some fun,” Garcia said.

“I came to the Father’s Day lunch and I thought that was good. Today is good too. It’s a great way to get together with friends and neighbors,” he said.

Another Sullivan resident and frequent participant in activities was Nelson Rojas. He, too, enjoying the time with his neighbors, and the fun of trying to fill in Bingo squares as Burgos read them out in both English and Spanish. 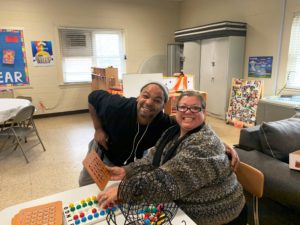 “It’s great to have fun with this group,” Rojas said. “It’s a chance to get out of our everyday schedules and do something different, enjoy some time together. I will definitely be back.”

The program involves schools as well as other organizations, including Springfield Parent Academy, Springfield Education Association, Baystate Health, the City Library, Behavioral Health Network, the Eric Carle Museum, and more, in an effort to provide enrichment and boost literacy among children as a family and team effort.

Data collected over the years have shown that involvement in T/R/S! boosts reading levels among children, and more involvement among families.