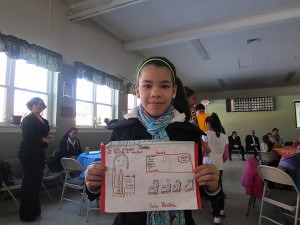 Julie Yulive, 10, of Moxon Apartments, wants to be a teacher one day.

With Black History Month as a backdrop and the Rev. Martin Luther King for inspiration, youth at four Springfield Housing Authority developments found reason to hope and dream big during the month of February.

And on Feb. 21, three dozen after-school participants Duggan Park, Moxon, Pine-James and Riverview apartments gathered to share their dreams, and thank four role models who are helping to guide children through their growing years.

Children and their caretakers filled the Community Room at Riverview, holding colorful hand-made signs that shouted out their dreams for the future: ‘FBI Agent,’ ‘Math Teacher,’ ‘Astronaut,’ ‘Entrepreneur,’ and many more. 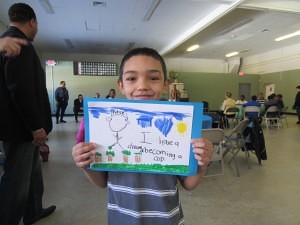 – Six-year-old Abraham Guzman of Riverview Apartments lets guests know his dream job – to be a police officer – at the luncheon event.

The noontime event, named ‘I Have a Dream,’ was sponsored by ADC Prevention Services, which provides after-school and summer programming for youth at the four SHA developments. There were awards, recognitions, a poetry reading, a saxophone solo, brief speeches and lunch.

“During Black History Month the dream usually focuses on Martin Luther King, which is great,” Cox explained. “This year we decided to focus on the kids’ dreams, and get them thinking about how to make their dreams a reality.”

Boys and girls in the programs spent the weeks leading up to the event researching and thinking about their dream lives. They mapped out the steps needed to reach their first choice, and even came up with a ‘Plan B’ in case that doesn’t work out.

Junior counselor Jordan Drummer is a sophomore at the High School of Science and Technology. He works with children at the Moxon Development after school and during the summer, when he can.

Drummer is a product of the ADC after-school program, and said he is grateful for what the caretakers have given him. He said he’s happy to give back to the younger set.

“ADC made me grow as a person,” said Drummer, who took up saxophone this year at Sci-Tech and was happy to serenade those at the event. 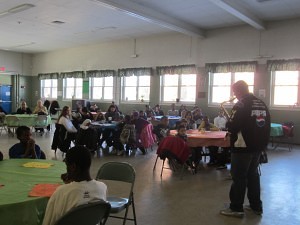 Budding musician Jordan Drummer, a High School of Science and Technology sophomore who lives at Moxon Apartments, plays a tune on the saxophone at ADC Prevention Services’ ‘I Have a Dream’ awards event at Riverview Apartments.

“They helped make my character grow and provided me with a positive outlet. They give you room to grow, and keep you out of trouble,” he added.

Drummer’s dream? “I want to be a musician. My Plan B is to be an engineer,” he said. 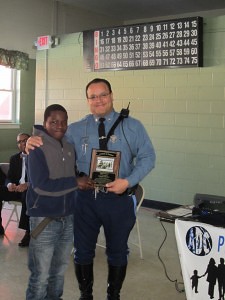 Awardees thanked ADC and children, speaking of their own childhood struggles and the dreams that kept them moving forward.

“Reed Village is where I grew up, and I had a hard childhood,” said Gaynor, who helps ADC youth on financial literacy skills.

“It’s programs like this that made a real difference in my life. I never imagined I’d be where I am now – to you I say don’t give up on your dreams, no matter how far out of reach they may seem. Your dreams are worth the wait,” she added.

Brothers Genero and Orlando Medina grew up in Springfield with programs like the Boys Club to guide their way and help them to imagine and create opportunities in higher education and law enforcement.

“I’m honored. I’m humbled,” said Genero of his award and recognition. “I knew I wanted to be a police officer, and it was my dream to be a special agent for the FBI. When it was time to take the test I worked hard and I passed it.”

His brother Orlando gave his thanks and thoughts in Massachusetts State Trooper uniform, saying his career started out as his ‘Plan B.’

“I always wanted to be an architect. This was my second choice. But I’m so glad it worked out this way,” he said.