Springfield Public Housing plumber Rick Hawley and Roger L. Putnam Vocational Technical Academy senior Edgardo Morales have the kind of working relationship that can best be described in a word.

Hawley, a plumber at SHA the past two years, and Morales, an 18-year-old who will soon graduate from Putnam, have been working together since last November.

Every other week, when Morales is on his technical time at school, he works beside Hawley, making repairs on pipes and sewer lines, installing boilers, swapping out pumps – essentially doing the things that a licensed plumber does. They are based out of Riverview Apartments. 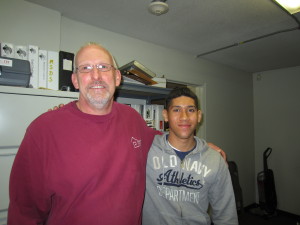 Morales said he learns new things every day, and from “the best teacher I ever had in my life.

“Rich is a great guy. We’ve worked on so many different things and I know a lot more about the business now than I did before,” said Morales.

Hawley said he’s happy to teach new skills to Morales, who he spoke of in glowing terms.

“He’s really come along. He’s a great worker who shows up on time every day, and who shows enthusiasm for the work. He’s very polite,” Hawley said.

“He’s mechanically inclined, that’s for sure. And I never have to tell him to do anything twice,” he added.

Morales knew from a young age that he wanted to work with his hands, doing something technical that helped people. He decided to go to Putnam for that very reason, though he wasn’t sure exactly which vocation he would choose. 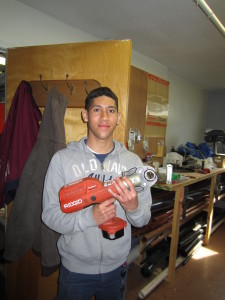 As ninth-grader, he was switched from shop to shop in a system Putnam uses to expose all students to the 23 vocational programs offered. As soon as Morales got to the HVAC shop –that’s heating, ventilation and air conditioning – he knew he had found the right place.

“I liked HVAC as soon as I tried it out,” he said. “I like it because there are different things to it, where you’re not always doing the same thing. And I like it because of the fact that I know I can make a good living out of it, and I can fix things myself.”

Morales lives on Franklin Street in the city’s Liberty Heights neighborhood, with his parents, Edgardo Morales and Enid Ortiz, and two older sisters. He graduates Putnam in June, and shortly afterwards will take an exam to be a licensed HVAC professional.

His first stop will be basic training at Fort Lee in Missouri. After that, he hopes to use the HVAC skills he has acquired in school, and at the SHA.

Meantime, Morales has maintained honor roll status at Putnam, even as he has participated in wrestling, cross-country and track. And, of course, his weeks at SHA, when he works 7:30 a.m. to 4 p.m.

Morales and Hawley agree on many things, including this: They will miss each other come late June.

“We’re definitely friends, he’s helped me so much,” Morales said.

To which Hawley added, “He’s been an asset to SHA since day one. And he’s going to come back and visit me.”