With a few weeks of tennis lessons under their belts, a dozen young residents at Springfield Housing Authority’s Sullivan Apartments took to the court recently to show their stuff in a public way.

The children, ages 6 to 11, aimed their rackets with precision at a makeshift basketball-turned-tennis court behind the family development in the Liberty Heights section of the city. While they hit balls back and forth, their families enjoyed a Saturday of fun, including a barbeque lunch, a bean bag toss and other exercise-based competitions. 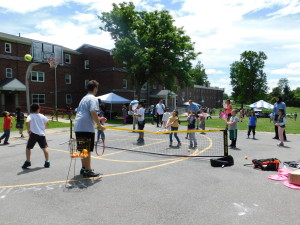 Tennis champs in the making warm up at Springfield Housing Authority’s Sullivan Apartments.

The celebratory event came courtesy of SHA’s Resident Services Program and the United States Tennis Association through a newly formed non-profit, Moving On Up with Tennis and Education program. For the past month,  professionals from the Ludlow Tennis Club have been volunteering their time, twice weekly, to teach the young set how to serve, lob, volley and smash balls across a low net.

For new players like Anieliz Chico, the tennis lessons are both fun and educational.

The party at Sullivan was a chance for families to get together with tennis pros and enjoy a day of activities. Tennis will continue there as part of the program that aims to bring the sport to communities that typically don’t get it.

“We try to promote and grow tennis throughout New England,” explained Chantal Roche, who is Diversity and Inclusion Manager at the USTA regional office in Westborough. Other youth programs involved are the YMCA of Greater Springfield and Camp Weber, one of its summer programs.

“Tennis is a sport that teaches children not just a game, but skills like focus and sportsmanship that they carry with them throughout their lives,” Roche said. “It’s never too early to teach and start practicing tennis. It can also be an amazing pathway to play on a high school sports team, or to get scholarships for college.”

SHA Deputy Executive Director Nicole Contois, a longtime tennis player herself, helped to bring the program to Sullivan and said so far, it has been a big success for families.

“Everyone loves it,” Contois said. “When tennis is on the schedule, the kids are lining up to play.”

The Saturday event brought out parents as well as children. Face-painting, popcorn, cotton candy, a ring toss and, of course, tennis, were high on the popularity list. There was solid agreement that the day was a fun way to spend time with neighbors.

Sullivan Apartments residents Taisha Rodriguez and her daughter Amia, who is 9.

“This is great for all of us, especially the children,” said Taisha Rodriguez, the mother of four, including three who are learning to play tennis.

“Anything to do with sports and moving around is a good thing for them. It keeps them active. They’re always excited when it’s tennis day,” she added.

Yanira Rivera’s six-year-old is loving tennis, after just a few weeks. The party was a blast, too, she said.

“Activities like this are great,” Rivera said. “There’s just so much going on, and it’s good for the kids.” 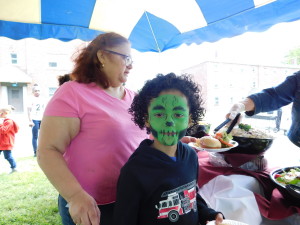 “It’s been great,” Navarro said. “It keeps them busy, and it’s way better than having them sit inside and watch TV.”

Pat Murray, a member of the Ludlow Tennis Club, organizes volunteers to teach the sport at several locations in the area, including at Sullivan. She said that where the program exists, it always proves popular.

“The children love it,” Murray said. “We reach out to inner-city programs so that children who normally wouldn’t have opportunities to learn tennis can get some skills using real equipment. At Sullivan, we have found some great talent.”

Murray is one who would know. She grew up with her family at SHA’s Robinson Gardens Apartments, and while she had a happy childhood, there weren’t many opportunities for organized sports, much less tennis.

“Tennis is a sport you can play all of your life,” said Murray, a retired executive from Chicopee Housing Authority. 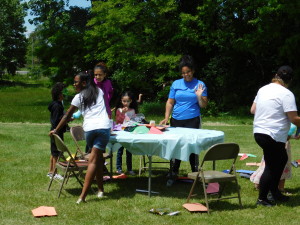 Youth counselors from the YMCA of Great Springfield help children make colorful paper airplanes at the celebration at Sullivan Apartments.

Murray said the program will be year-round, and eventually include competitions among different groups.

Rackets, balls and nets have been donated by organizations including Tennis Babolat, which manufactures and sells equipment for the game.