Advice to teens: Save your money

If there’s one thing Patrina Dixon knows about, it’s how to save money for a rainy day.

But she learned the lesson the hard way. Dixon remembers the bad years – getting her paycheck, paying her bills, spending the rest at the mall or in a restaurant – and then scrambling for the next expense, or an unexpected shortfall.

“It’s no way to live,” she told the dozen teens at Springfield Housing Authority’s Robinson Gardens Youth Group on a recent visit. “As I stand here today I can tell you that I wasn’t always good with money. I was spending every extra penny I had, and then there was nothing left.” 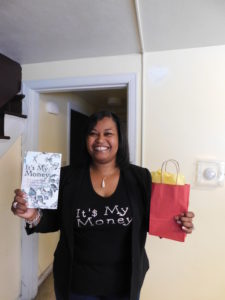 Patrina Dixon gave advice on saving money at Robinson Gardens Youth Group. She is shown here with a copy of her book and a tee-shirt that she gave to one of the teens in attendance.

Dixon is now owner of P. Dixon Consulting of Windsor, Conn., a firm that reaches out to young people across the region to promote financial literacy and good-sense practices to those on the cusp of adulthood.

At Robinson Gardens, she shared her own story, which began with bad spending habits and frequent forays into financial problems. Her turnaround began with the realization that putting money aside is a pathway to success, and in many ways.

“I have money set aside in case something goes wrong and I suddenly need something,” she noted. A case in point was a car breakdown that happened that very day for her. With a bank account, she can afford the repair without stressing.

“When you get your paycheck, who do you pay first? Yourself,” she stressed.

Robinson Gardens youth appreciated the advice, saying it gave them pause to think, especially considering they will all be working next summer.

Nate King, 16, is president of the Robinson Gardens Youth Group.

“She gave us good strategies to take when we’re earning money,” said Nate King, who serves as president of the Youth Group. “Instead of getting your paycheck and spending it all at once, you save some. Then you’ve got money in the bank and in the end, you can do more with it.”

SHA’s Youth Engagement Coordinator Jimmie Mitchell brings professional visits in regularly to meet with his teens, to expose them to professional people, and to teach them life lessons. 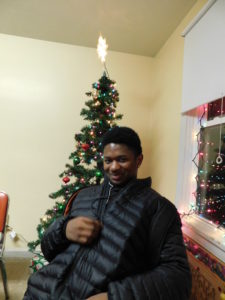 He said Dixon was particularly strong because her advice was so practical, and can be applied to their lives now. Come next summer, when SHA helps the teens get jobs through the New England Farm Workers Council, Mitchell will be sure they all have bank accounts and will be putting funds away for that rainy day.

Better yet, he added, “I’m going to have Ms. Dixon come back here in the spring to give them a refresher.”

Mitchell noted that convincing teens to sock money away is a goal worth achieving, especially as they are soon to be working and earning. The temptation to spend it quickly is a strong one.

“I’m thinking we’ll have more of the youth saving their money in the summer, thanks to Ms. Dixon’s visit,” Mitchell said. “The way she talked to them was so real and so energetic, she’ll really have an effect on them.” 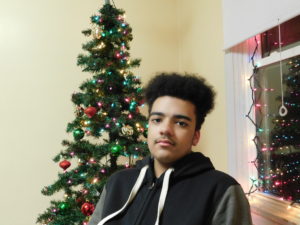 Christian Davis, 15, said saving money gives you “something to fall back on” when times are lean.

“We want them to grow up and be successful, to be making their own way in the world,” he added.

Youth Group member Kashawn Lenoir, who is 16, said the advice will be well-taken.

“Next summer hopefully when I’m working I’ll be able to put some in the bank,” he said.

Christian Davis, who is 15, said listening to Dixon gave him pause to think.

Dixon noted that in addition to a full-time job and the consulting work she does with youth and in youth programs, she has managed to write a book full of good advice. It is called ‘It’s My Money’ – a title inspired by her daughter’s declaration of the same when out spending her birthday money, at age 8. 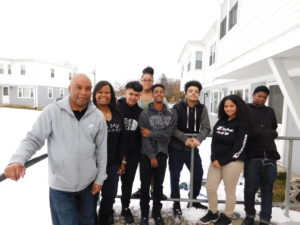 “It made me think of what I should be doing with my own money,” she noted. “After all, it’s my money.

“And I thought I should be putting money away. If I don’t do it myself, no one else will be doing it for me,” she said.

Her motto, in a nutshell:

“The way you save money is by spending less. It’s a very, very important lesson to learn, and the younger you learn it, the better off your whole life will be.”