Thanks to a generous donor with strong ties to Springfield Housing Authority’s Sullivan Apartments, food and gifts were plentiful for some two dozen children there.

The holiday party landed a week before Christmas, and found children in the after-school program treated to a pizza dinner, fun and games, and plenty of gifts, including toys, puzzles, balls, dolls and books to bring home for their growing libraries. 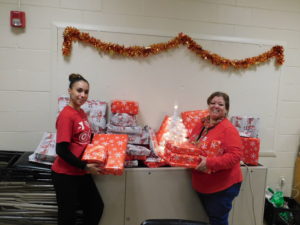 The party was co-sponsored by the YMCA of Greater Springfield, which runs the after-school and summer learning programs at Sullivan, and Talk/Read/Succeed!, SHA’s family-based early literacy program.

Gifts were supplied by a long-time donor for the development, Amy Kimball, who has gathered and delivered such needed winter items as blankets, coats, hats and mittens, to families at Sullivan. During the holiday season, Kimball, her family and friends make the extra effort to ensure that the children have toys and gifts for Christmas.

Kimball has made the effort for the past 15 years. It’s a much appreciated effort at that.

“The children are just so happy to have this party of celebration for the holiday season,” said T/R/S! Program Coordinator Zenaida Burgos, T/R/S! “Seeing the smiles on their faces and the excitement they share makes it a joy for us as well.”

As part of the celebration, children also went on a field trip to Bright Nights in Forest Park. That trip was sponsored by the YMCA of Greater Springfield. 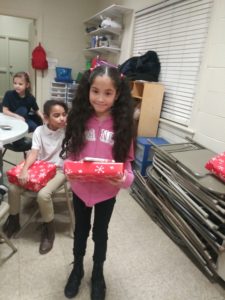 Nadali Morales holds one of her gifts at the holiday party at Sullivan Apartments.

Kendra Silva, who runs the after-school program at Sullivan, said the event was the perfect way to celebrate the holidays.

“Everyone has a great time at this,” she said. “It’s the spirit of the season.”

At the close of the party, each child took home two gifts, along with books from the Book Rich Environment program, which is courtesy of a national coalition that includes the U.S. Department of Housing and Urban Development, the U.S. Department of Education, the Campaign for Grade-Level Reading, the National Book Foundation and the Urban Libraries Council. SHA and the City Library are local partners, giving out some 4,000 books per year to children from infancy up to age 12.