Children in four Springfield Housing Authority after-school programs are reaching out to their counterparts on an island 1,640 miles to the south.

Boys and girls in the programs at Duggan Park, Moxon, Pine-James and Riverview have been learning the past year about poverty and need in the Caribbean country, which shares an island with Haiti.

Besides an ongoing pen-pal program with a youth program there, they recently worked together to help raise funds to send 40 new pairs of sneakers and many more pairs of socks that will enhance basketball skills for players at a mountain village court.

“They play without shoes on, and we really wanted to help them,” said 10-year-old Savier Morales of Duggan Park Apartments. “Knowing that we can help them makes us feel good. It makes us feel grateful for the things we have.” 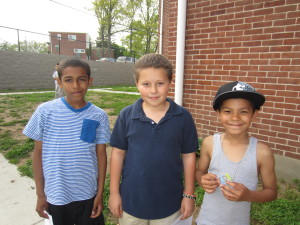 The after-school and summer programs at the four SHA developments are run by ADC Prevention Services & Associates, which has developed a growing partnership with youth programs in the Dominican Republic.

On a sunny May afternoon, children and adults from ADC gathered outside the Duggan Park resident services center to showcase the new sneakers and to thank children and corporate sponsors for helping make the plan a reality. ADC President Arnold D. Cox headed south the next day to deliver the footwear.

Among those thanked were Traci Gaynor of People’s Bank and Massachusetts State Trooper Orlando Medina. Both Gaynor and Medina have been frequent contributors and participants in the ADC after-school program activities, and this was no exception. 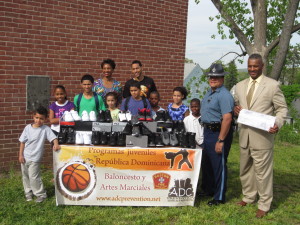 Cox said ADC has been working for several years with two Dominican Republic youth programs, one in Puerto Plata and the other in a tiny mountain village called Moca. It is the Moca program where the sneakers and socks are headed, but Cox said he has learned from experience that the needs are great in both places.

“It’s been a great partnership for the children here, as well as in the Dominican Republic,” Cox said. “Our children here are learning an awful lot about children who have even less than they do. It’s good for them to see that they can help others, and that they should be grateful for what they do have.”

ADC Marketing Manager Antoine McLoyd has visited the Dominican Republic with Cox, and found it to be an eye-opener.

“For me it was a life-changing experience,” McLoyd said. “I had never been to a third-world country before, or even outside of the United States. It’s definitely something I’ll remember.”

Gaynor and Medina said they were happy to be a part of the sneakers-to-DR campaign.

“I believe in the work that AC (Cox) is doing to help underprivileged kids, and I love working with kids because we want them to see the police as good rather than bad,’ Medina said. 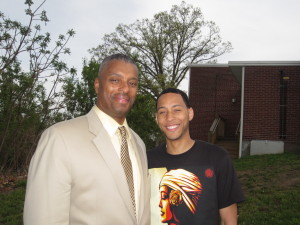 Savier Morales and his friends Eduardo Santos and Javien Lopez said they are proud to be a part of a project that is helping children living on an impoverished island.

“They don’t have shoes, or supplies, and they just have a little bit of space,” explained Eduardo, who is 10. “It makes me feel lucky and sad at the same time.”

Seven-year-old Javien added, “I’m thankful for the education I get in school, and for the food I eat.”

Children at the four SHA developments raised money for the shoes and socks headed for the Dominican Republic.