Community unites to end violence, one person at a time

Alternatives to Violence Project volunteers were expecting a smattering of people to show up at the
recent 2015 Community Kick-Off event on a Saturday morning at the Springfield Housing Authority’s administrative offices.

When more than 80 men, women and youth from all walks of life arrived, ready and willing for the introductory program on ways to reduce violence, organizers knew they were onto something.

“The turnout was fantastic,” said lead organizer Kathy Rubenstein, who has trained people across New England in personal ways they can head of violence in their lives. The method has proven successful  wherever it’s been tried. 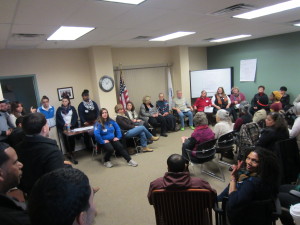 Participants came from all walks of life to the Alternatives to Violence Prevention event at the Springfield Housing Authority.

“People are looking for something that will make a difference in a world where violence seems to be all around,” she said. “This program works, and the fact that it’s free is great because you can cut through all of the red tape and just get people involved.”

Indeed, the Saturday morning session resulted in an overflow crowd that included a teen group in the spacious hallway of SHA’s new headquarters at 60 Congress St. Inside the office areas, the remaining 60-odd people were divided into two groups, where introductions were made and discussion centered around the will to find a more peaceful way to live.

SHA Deputy Executive Director Michelle Booth, herself an AVP facilitator and committee member, helped organize the event, and said invitations were sent to a variety of organizations and community groups – this program seeks to engage all in finding solutions to violence. The turnout, she said, was spectacular.

“It shows how much people want and need to be a part of a community that can live together without violence,” she said. “The people who came to this event want to be a part of the solution and we want to engage others.” 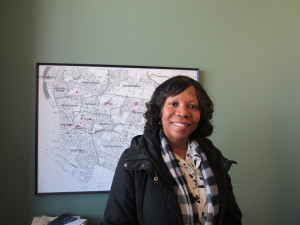 Cheryl Ray-Bass, a counselor at the Rebecca Johnson School, said she will use the violence prevention training on the job and in her life.

Training will continue for many of those who attended, and anyone else who is interested. Rubenstein is organizing the future weekend sessions that will provide the training. Anyone interested can email her at avpspringfield@gmail.com

Participants at the session at SHA agreed they were driven by a desire to play a role in improving the quality of life in their neighborhoods and communities.

Cheryl Ray-Bass is a counselor at the Rebecca Johnson School in Springfield. She has basic AVP training, and is working towards full certification.

“I’m hoping to use it as part of my mediation skills with children,” she said. “I think it helps. A lot of the problems I see are about communication. People so often don’t know how to communicate with each other.”

AVP training includes the sharing of basic communication tools to head off altercations, and to settle disagreements. It teaches participants methods to handle the daily conflicts of life in creative and effective ways. 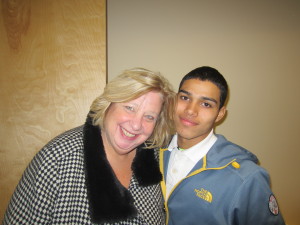 High School of Commerce Graduation Coach Dawn Rodgers and junior student Romen Rodriguez plan to offer the training together at the Commerce.

High School of Commerce Graduation Coach Dawn Rodgers attended the session with one of her students, Romen Rodriguez. Both plan to carry through with the entire training, and then bring the AVP method together to Commerce, where they will train anyone interested and willing.

“This is such a great opportunity to see how individuals can play a role in reducing violence in Springfield,” Rodgers said. “Our plan is to be trained together, and to co-facilitate at Commerce.”

Rodriguez said the training is especially meaningful to him, as he lost a brother two years ago to violence.

“My brother was murdered, shot. I still miss him every day,” said Rodriguez, who was 15 at the time and looked up to his 18-year-old brother as a mentor and a friend.

“I would like to take this training and pass it on to people who can use it to avoid violence. I want to help my community. I want to make sure other people don’t have to go through with what my family did,” he said.

Rodriguez is on the football and track teams at Commerce, where he also is a member of the ROTC. A junior, he plans to join the Navy on graduation and eventually study mechanical engineering. 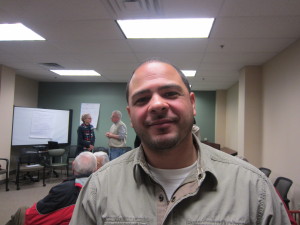 AVP trainers like Freddy Lopez noted that training changes the outlooks and lives of those who participate.

“It’s not therapy, but it’s therapeutic,” said Lopez, who is a real estate broker at NAI Plotkin and a lead AVP facilitator.

“You learn a lot about yourself. It’s about finding ways to seek common ground with other people, and having meaningful conversations.”

AVP began in 1975 at a New York state prison, and has since expanded to communities in 38 states and more than 40 countries.