The group met for three consecutive days recently for an intense – and fun – training session with the Alternatives to Violence Project, a volunteer organization that offers conflict resolution workshops to transform lives and build peaceful communities. The sessions included role-playing, acting out scenarios, and breaking down communication into digestible chunks to analyze.

Open to any SHA employee willing and interested, the sessions drew from a variety of districts, amps and offices. Included in the roster were an SHA commissioner, a deputy, several directors and property managers, those at the clerical and aide levels, and one participant from Springfield City Hall.

“I was thrilled to see the number, and the cross-section of our staff that came forward,” said Deputy Executive Director Michelle Booth, who organized the session and served as one of four key trainers. Other trainers were Michelle Ricker of the Public Safety Office, Kathy Rubenstein of AVP Massachusetts and Awilda Sanchez of the Old Hill Neighborhood Council. 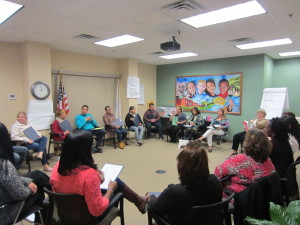 Springfield Housing Authority employees in training with the Alternatives to Violence Project.

Booth has been active in bringing AVP to schools, libraries, churches and other organizations in Springfield over the past three years. She said the SHA session was a huge success, now bringing an important core group of trained peacemakers that represents a broad spectrum of the SHA family.

“This will enable us to bring this proven, effective violence prevention method out to residents and to the community,” Booth said.

For those who attended the full-day sessions, becoming a certified as having completed basic AVP training was nothing short of transformational.

“I loved everything about it,” said Daisy Gomez, who is Resident Services Coordinator working out of Sullivan Apartments.

“I learned so many different things about myself, and about dealing with other people. It was nothing like what I expected. I got so much out of it,” she said.

Senior Property Manager Daniel Bresnahan said he could already see himself using the techniques and tips that were a part of the training.

“It was great,” he said. “You learn to think about patience, and seeing the way you communicate in a totally different way. I can see this being good for anyone who gets involved and tries it.”

AVP workshops use participants’ own experiences, along with interactive games, exercise and role playing to help people examine the way they interact with others, in particular during situations where injustice, prejudice, frustration and anger can lead to aggressive behavior.

Launched 40 years ago as a program for inmates, AVP now exists in 33 states and more than 40 countries. Sessions are always free of charge. The training has been shown to help participants manage feelings about anger and fear, deal more effectively with risk and danger, build good relationships, communicate well in difficult situations, recognize skills and learn new ones, be true to oneself while respecting others, and understand why conflict happens.

Those benefits certainly hit home at the SHA training session.

“It’s not like any training I’ve ever been to,” said Jessica Quiñonez, who is on the SHA Board of Commissioners.

“It’s the kind of thing that you can use in your everyday life, in your personal relationships as well as at work. I know I’ll use it as a commissioner, and in anything else I do,” said Quiñonez, who is president of the tenants’ council at Jennie Lane Apartments, where she lives. 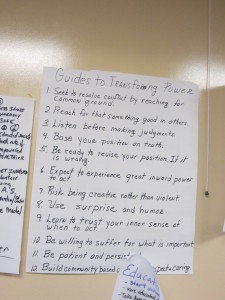 “Guides to Transforming Power,” a part of the AVP training.

“You learn alternatives to building better community, and a lot of different ways to communicate. I’ll absolutely use this,” Collins said.

There are three levels of AVP training: basic, advanced and trainer.

Booth is at the trainer or facilitator level, meaning she has trained for more than 60 hours, including as an apprentice. She works closely with Rubenstein on training sessions at locations around the city.

Since Booth got involved in AVP in early 2012, some 100 people in Springfield have received some level of training, including 15 teens and young adults who are using skills in the community.