To crack inferno and back

Life was going great for John Pearson until he hit a bump in the road at age 28.

Born into a solid middle class family in Springfield, he was a star football running back at the High School of Commerce, graduating in 1975. Colleges were beckoning, offering coveted scholarships. He had a strong support system of both family and friends, and everything to look forward to.

Instead of college he joined the U.S. Army, where he spent eight years. He admits during that time to smoking weed and occasionally, dabbling in sniffing cocaine. Next was a job bartending in Springfield that proved to be his personal road to catastrophe. He began to spend more and more nights partying with friends from the bar. 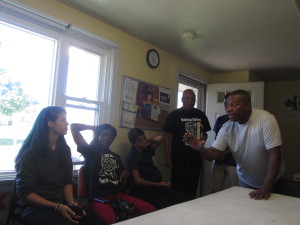 Pearson detailed the next three decades of his life to Springfield Housing Authority’s Robinson Gardens Youth Group as life in a pinball machine, pinging back and forth between trying to hold a marriage, family and work together, and the days and nights on end where he’d end up in one of any number of crack houses in and around the city.

Those dark periods were spent sucking up the sweet grey smoke that would consume him, driving every responsibility and thought away save for the one that lead to the next crack-filled pipe.

It was the half of his life that Pearson, now 60, is now working hard to stay away from.

“That crack had me so torn up, you could count the bones in my face,” he told the youth group.

“Sometimes I’d spend seven days in a crack house. Then I’d sleep for three days straight. My life was a wreck – there’s no reward when you’re on crack – it’s death or prison,” he said. 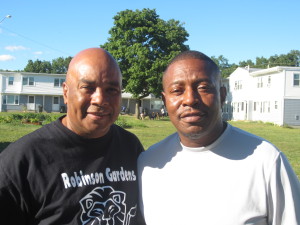 Now one year clean, Pearson considers giving back part of his recovery, and his visit to Robinson Gardens is a piece of that. He wanted Jimmie Mitchell’s Youth Group to see the reality of drug addiction, and to stay far away from it.

“Stay in school. Go to college. Listen to your parents – they’ll never tell you to do something that’s bad for you. Don’t do what I did. You don’t want that life. If you say yes to drugs, you will always wish you had said no,” he said.

The dozen teens who attended the hour-long session agreed that hearing a message like that is far more powerful than reading a poster or watching a TV ad about the dangers of drug use.

“It was such a sad story, but it’s good that he told us about it,” said Iyannah Simmonds, who is 18 and a senior at Commerce.

“We’ll all think twice about doing any kind of drugs. It’s good to hear from someone who’s actually been through it so none of us will fall into his footsteps,” she said. 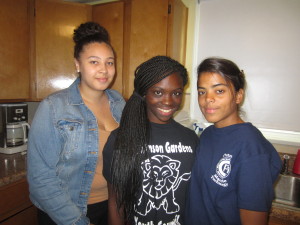 “This really opened my mind more about drugs. I can’t imagine living a life like that, full of problems and bad times,” said Rivera, a senior at the Roger L. Putnam Vocational Technical Academy, where she is studying machine technology.

Christopher Ortiz, who is 15, found the talk “interesting.

“This helps us to know not to do what he did. He’s had a bad life, what he went through. We were all paying attention,” said Ortiz, a ninth grader at Central High School.

Mitchell was 18 when he first met Pearson as a friendly, funny 13-year-old who was active in the Springfield Boys & Girls Family Center on Acorn Street. Mitchell was a counselor there – a job he continued professionally at Putnam until his retirement and move to SHA, where he continues his vocation.

Occasionally, Mitchell would run into the troubled Pearson and wonder what was going on. Several months ago they crossed paths, and Pearson shared his story with Mitchell.

“I could see he had turned his life around. I asked him to come visit the group, and he said yes,” Mitchell said. “I’m always trying to bring in people who have been through things like this. Drugs are the number one killer of our kids in this country, and I want to make sure my kids know enough to stay away.” 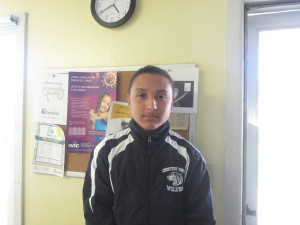 Fifteen-year-old Christopher Ortiz said hearing a recovering drug addict tell is story is sure to have an impact on the youth at Robinson Gardens.

Fielding questions from the teens, Pearson said he had several good jobs, including one as a correctional officer at a prison in Connecticut, and another a courthouse guard in Springfield. But his habit had a way of holding him back, steering him off track.

Pearson also has five children who he remains close with.

It was a late-night drug arrest in Ludlow last year that finally turned him around. A night in jail, facing criminal charges, Pearson realized he had wasted half of a life, and didn’t want to waste any more time on his demon.

Luckily, his time in the military saved him – rather than prison, he was sent to a rehabilitation facility, and has remained clean and healthy, looking remarkably younger than his age.

He also has a job at a downtown restaurant, another thing he is thankful for.

Pearson has made amends with his family, through positive actions rather than empty promises. He stays on track with support from his loved ones, and a renewed faith in God. He told the teens that if he can save even one of them from his own fate, his visit to Robinson Gardens will be more than worth it.

“I don’t want any of you to go through what I went through,” he said.