Thanks to the ongoing generosity of a donor who prefers to stay out of the limelight, three families at Springfield Housing Authority’s Robinson Gardens Apartments have entire Christmas dinners, from soup to nuts.

The families, chosen based on need, arrived to the Community Room just before the holiday to pick up what will surely be a feast – turkey, potatoes, sweet potatoes, stuffing, gravy,  macaroni, and pies.

They also expressed deep gratitude for the generosity coming at a time when there were few options for them, financially speaking.

“It probably would have been rice and beans for us on Christmas day,” said Hayde Torres, the mother of three children. “I told them there wouldn’t be any presents.

“So this is just great. It’s helping me a lot. It’s kind of overwhelming to see all of this and know that we’re going to have such a nice dinner, together,” she added. 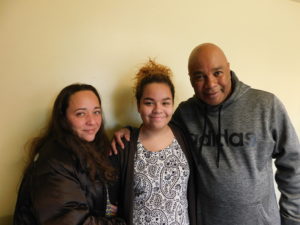 Her 14-year-old daughter Twaila Santiago also gave thanks, saying the best part of her Christmas is “spending time with my mother and my family.”

The holiday largesse came courtesy of Springfield resident Santino Tomassini, who has taken the Robinson Gardens families under his wing, with regular donations of whatever is needed at the moment. He has given funds for holiday meals, covered costs of trips for the Youth Group, bought technology for after-school programs, and more.

“We like to say ‘Our mystery man strikes again’ when he stops by with a donation,” Mitchell said. “He’s really saved a lot of people, just when they need it. This is our fourth year doing this, and it keeps getting bigger.” 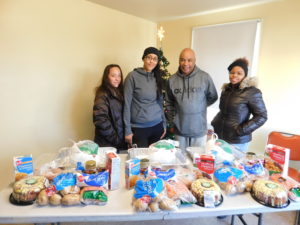 For mothers like Melissa Cruz, also the mother of three young children, the meal fixings will make a big difference for her family.

“This means a lot to us,” Cruz said, visibly moved.

“We’re going to have a nice Christmas dinner. It’s always hard to afford anything at the holidays, and you’re thinking about presents, and then the food. This is great,” she added.

Octavia Jones has three young children as well, and she said Tomassini’s generosity is a godsend this year, coming at financially hard times for her.

“This is going to help me a lot,” Jones said. “It’s making everything so easy for me. I’m just so happy to see this.”