On a recent rainy morning, SHA staff gathered with Urban League officials and the family of the late Donna Blake to share the items with residents selected as in need of assistance at seven developments across the city.

The gathering and distribution center was at the Donna Blake Park on Pendleton Avenue, named after the woman who served her community and worked as vice president at the Urban League before her death in 1998. 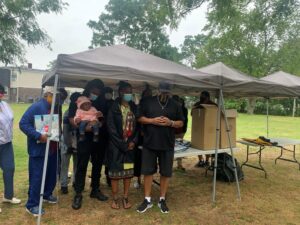 SHA Executive Director Denise R. Jordan thanked the two agencies who put together the gift bags, as well as her staff who worked hard to identify the residents in need and set up speedy deliveries.

“We’re very grateful for the generation donations from the Urban League and the Community Foundation,” said Jordan. “It means so much to our residents who need the help.”

She also noted the park that served as a setting for distributing the donations.

“Donna Blake was a strong and giving part of our community. It’s fitting to start our operation to help our residents from this location,” Jordan said.

Gift bags were from Big Y, and included items such as hand sanitizer, face masks, snacks and gift coupons for groceries and gas. 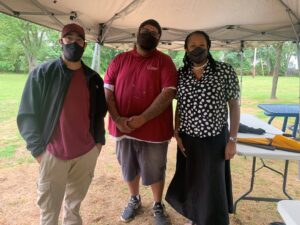 Urban League President and Chief Executive Officer Henry M. Thomas III said the donated items came from a COVID-19 grant from the Community Foundation, to help those most in need as the community deals with this global pandemic.

“With these survival kits, we are providing some needed items for our seniors, many of whom cannot always easily get out,” Thomas said.

“We are living in extraordinary times, and during extraordinary times, people need a boost. These are people who are among our most vulnerable, and they need a bigger boost than the rest of us. We’re happy to do this, and we’re thankful for the support of the Community Foundation,” Thomas added.

“These bags will be much appreciated by our residents,” West noted. “We thank you for them.” 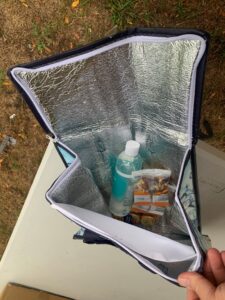 Gift bags with essential items and shopping certificates were given to 140 SHA elderly and handicapped residents across the city.

Speaking on behalf of the family of the late Donna Blake was her son George Blake, who also shared his gratitude.

“We are so grateful for this,” said Blake, who was accompanied by his son George Jr., his wife Della and their young daughter Kairi, who took time to play on the swings in the park.

“My mom was and is such an important part of our lives, and to see her honored here in this way is so gratifying,” Blake said.

“You are creating a pathway so that my grandchildren can also know how important she was to all of us.”