Those are among the excellent messages relayed through art in the annual Fire Prevention Poster Contest held recently at Springfield Housing Authority’s Sullivan Apartments, where the Talk/Read/Succeed! program instills literacy skills with family-based programs.

Three winners were announced for their artistic endeavors: Zhyanna Greene took first prize, siblings Jesenia and Jesus Crespo, second prize, and Daniel Hernandez, third prize. Each got a gift certificate and other prizes given out to all 13 contestants. 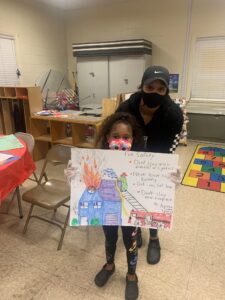 Zhyanna Greene, age 6 and a first grader, with her winning poster and her mother, Zuleyka Pedroza.

SHA Executive Director congratulated the winners and all who participated, saying they used their creative energy to underscore important lessons about fire safety.

“What a positive and wonderful way to get the message out about how to prevent fires in our homes and outdoors,” Jordan said. “The entries at the Sullivan contest were just beautiful. Congratulations to the winners and all of the children who entered the contest.”

T/R/S! Outreach Coordinator Zenaida Burgos oversaw the contest. Each participant received a $5 gift card to Dunkin’, while winners got larger amounts to Walmart.

“It was so great to see so many of our children at Sullivan participate in the contest,” Burgos said. “They really dug in and showed that they understand the things they can do themselves to be sure their homes are fire free and safe.”

The contest included participation from the National Fire Protection Association, which provided the coloring books and crayons given out to all participants. Children also got to take home a free book, which came courtesy of came courtesy of the U.S. Department of Housing and Urban Development’s Book Rich Environments Initiative.

The young artists, for their part, were happy to share their artistic talents and knowledge about fire safety. 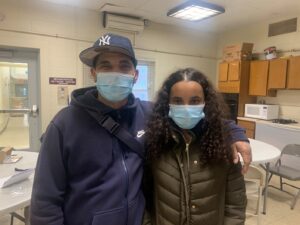 Daniel Hernandez and his daughter Jordyn, who entered the fire prevention poster contest at Sullivan Apartments.

Six-year-old Zhyanna was thrilled to be the first-prize winner for her colorful poster, which showed a house with blazing flames shooting out the roof, and a firefighter on a ladder dousing it with water.

“I wanted to show what happens when a house catches on fire. You have to be so careful and not let fires get started,” she said.

Her mother, Zuleyka Pedrosa, said Zhyanna put much time and effort into the piece.

“She really got into it,” Pedrosa said. “She loves to color, and she loved showing how important it is to know about fire safety. I’m so proud of her.”

Daniel Fernandez’ father of the same name picked up his third-place prize as his son was home, still doing his school lessons remotely. Daniel’s poster featured advice to avoid overloading electrical outlets and to keep fire extinguishers close by.

“I wanted my children to participate in this because it’s so important for them to know about, and think about, fire safety. It’s important for all children to know these things so when they grow up, they’ll do the right things,” Hernandez said. 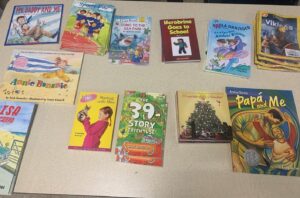 All participants in the contest got to take home a book, courtesy of the U.S. Department of Housing and Urban Development’s Book Rich Environments Initiative.

His daughter Jordyn Hernandez, 12, also participated. Her poster featured a bright red couch with a girl sleeping on it and a nearby stove with a pan and the burner on, along with the words, ‘Don’t forget to shut the stove before leaving it unattended.’

“I liked drawing it out and I wanted it to have a lot of color,” she said. “I got the idea for it while I was cooking and I thought, remember to turn off the stove when you’re done.”

Children worked on their projects while learning remotely due to the COVID-19 global pandemic. Springfield schools have been closed to students since last spring when the virus began to spread, and will remain so until further notice.