Zakaria Baloune is making his dreams come true, one at a time.

And those dreams took a big leap forward recently upon completion of a partnership between Springfield Housing Authority and Springfield Technical Community College.

SHA Executive Director Denise R. Jordan said the HiSET educational partnership enables people like Baloune to move forward with their lives by getting the high school equivalency certificate they missed out on when they were younger.

“We’re thrilled to be able to facilitate people like Mr. Baloune – and so many others – in getting the education they need to advance their professions and lives in such positive ways,” Jordan said.

Baloune was born in Casablanca – that’s right, the setting of the 1942 classic film starring Humphrey Bogart and Ingrid Bergman. It is also the largest city in Morocco, bordering the Atlantic Ocean. 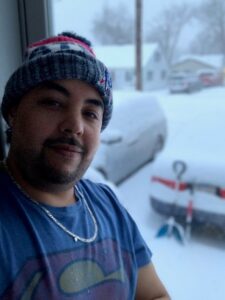 His motivation to become an American brought him to Springfield in 2003. His dream for citizenship came to life in 2011.

“There is nothing like the sense of freedom here,” said Baloune, now married with two young boys ages seven and five.

Baloune earned a commercial driver’s license in 2007 and has worked as a truck driver ever since, supporting his family. While being an American was what he’d dreamed of, opportunities were limited by his lack of education. It seemed that everything he wanted to do with his career in the long-term required a high school diploma, at a minimum. Trying to go back to school as an adult is difficult enough, but the schedules of the classes in the area never matched up with his work schedule.

But then last April, Baloune was told that there was a unique opportunity available for Adult Basic Education classes at STCC.

In a state program that includes a partnership with the SHA, there was one class he could take that had no scheduling conflicts of any kind – because it was entirely asynchronous. The chaos of the pandemic had forced every program to move to a completely remote online format.

But the class at SHA’s Sullivan Apartments had made an even bigger change, to both remote and asynchronous, one of the only such programs in the state.

In general, remote learning follows the same schedule as face-to-face learning; everyone shows up at a specific day and time and learns together as a group, just on video platforms instead of in-person. 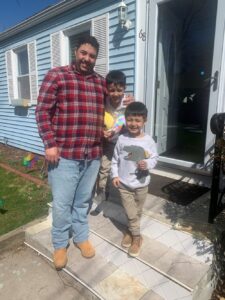 Zakaria Boloune with his sons Yahya, 8, and Yezen, 5, outside their Agawam home.

However, the pandemic shut down more than just adult in-person learning, as public schools went fully remote as well. For adult learners, the challenge of meeting at specific days and times got even harder as their own children were suddenly home 24/7. Add in caring for aging parents and working a job, and you can see how students like Zakaria simply couldn’t continue their education without an asynchronous option.

With that in mind, SHA’s Adult Basic Education Program Coordinator, Brenna Kane, redesigned their class to be entirely asynchronous, with no set schedule at all.

Each student gets access to the online platform, in this case, Google Classroom. She uploads PDFs of lessons in each subject, along with an instructional video of her teaching each skill.

Everything drops into the “classroom” once a week and students have 10 days to watch the videos, practice the skills, and return the assignments. Some students do the work at 5 a.m., before children are up for the day. Some learn at midnight after getting home from work and when the house is finally quiet. Still others save school work for weekends because that’s their best option.

As long as the works get completed and submitted for review at some point in those 10 days – everything is good.

Every assignment is corrected and each student gets personalized feedback on any mistakes that were made. If necessary, they even get their own personalized video feedback to go over the specific way they may have misunderstood something in a lesson. And every week, students can drop into video “virtual office hours” to live-chat with Kane and ask any questions they may have.

This type of asynchronous class structure requires students to have a great deal of self-motivation and time management skills; it doesn’t suit everyone.

But Baloune, who now lives in Agawam with his wife and two young sons, is a perfect example of a successful outcome – for the first time in all those years he was finally able to take classes in a way that worked for his life.

When he was done driving for the day, he would pull out his device and read through the assignments, watch each video, and practice each skill. As he polished up his skills and filled in his knowledge gaps, he took each of the HiSET tests, one at a time, passing each one on the first try.

He’s now completed the whole process and has his diploma.

He said he loved the flexible schedule, as well as the instruction itself.

“The class feels very chill and the staff are outstanding,” Baloune said.

Now that he’s graduating, he’s decided to enroll in the Transition to College program, offering a year of college classes for free along with books, tutors, and loads of support. His long-term plan is to get a degree and become a documentary filmmaker.

Kane said, “With his talents and determination, I have no doubt he’ll succeed. And perhaps we’ll finally get Casablanca Part Two.”